Watching Max and Dominic on their YouTube Channel Paruresis Exposed, really opened doors for me.

To actually see two people who are mostly cured through the breath-holding technique has given me a lot of hope.

Granted, no one is ever totally cured from Paruresis, but the freedom they now have has given them a new life and a new outlook.

I have to say it is rather a little embarrassing watching someone pee. After all, this is something we normally hide; our secret shyness. But that’s the gist of this phobia. To get over that fear that this is normal and everyone does it and it’s no big deal.

I’ve listened to them talk about the breath-hold technique. I’ve seen them do it repeatedly in the videos with different results. Dominic tried one breath-hold where he tensed up and tried to force himself to pee. It didn’t work. He couldn’t go. Later, once he relaxed, he tried again and had success.

It’s all about controlling your mind and body. Keeping it relaxed while your lungs are screaming for air. It’s a rather bizarre thing to relax while your body is gasping or convulsing.

But it’s at that moment (or ten seconds later), when your guard is down that your inhibitions will dissolve away, the bladder floor will drop out and the pee will run free.


I watched all the videos a couple of times.

I even held my breath at the same time as they did just to see if I could do it. It’s not easy! Especially under pressure. Especially (as in Dominics case) with someone watching.

In every video, Dominic would turn away from the camera (and his pee-buddy camera man), and within a minute, he was pissing in the toilet. It was hard to tell from the video if he was gasping for air, turning red, heaving or swallowing to fight the urge to breath, all because he had his back to you. There were 13 videos in the channel and not one single one of them showed what was happening to their face.


I decided to find out.

I sent Dominic a message through the IPA Forums. I asked him if he could make a video showing his face this time. I really wanted to see if someone were to stand next to him at a urinal, if they would notice he was gasping, holding his breath, struggling or convulsing in any way.

I know mine would be. I’ve been practicing with breath-hold for over a week now and end up gasping for air like a lunatic before I pee. Anyone standing besides me would probably be startled, jump and really make me feel like more of a freak than I already feel.

I’m gasping in air like I’ve been underwater for 1/2 hour. What gives?


I really wanted to know.

I have no one here at home to walk me through this. And seeing it done first hand is the best way to learn.

I sent him this message:

I really like the videos that you and Max put on youtube. That’s what lead me over here to the forums. The only thing that I miss from the videos, is actually seeing the breath-hold work in progress. You talk about it, but we don’t get to see it because you turn away from the camera (and for good reason). But can you do a video that actually shows your face while doing the breath-hold. I’ve been practicing it for the past week and it’s hard to totally understand unless you actually watch someone do it.

Thanks much. You guys are helping me a lot and I intend to cure myself. :)

I was very surprised that Dominic quickly replied, let alone agreed to make another video. He said:

I see your point. I’ll try to make this video one of these days.

Good luck with your road to recovery. But understand that I’m not recovered from Paruresis either. I just learned to live around it. I can pee anywhere at any time now, but I need breath hold for that. For me it’s the perfect solution, I hope it will work for you too. I’ll keep an eye on your progress.

I was floored! I thought he’d laugh at me or think I was weird, but he got it.

He understood that it could be a great learning tool for other people with Paruresis. I was even more floored when 2 days later he writes me:

I just finished making the video. Keep an eye on the channel.

I learned BH over two years ago, I’m pretty much done with paruresis. Occasionally I find myself thinking whether or not I should go the restroom or wait a little longer, but that’s like all there’s left from paruresis. It’s more a question of when, then where. It has no more control over my life, I do whatever I feel like doing without thinking about peeing. Having fun when going out. It’s a great thing. On NYE I actually peed in some bushes next to a good friend on a square with a few thousand people. I’m not saying you should do that too, but when you learn BH, you can just pee where you want, which is really a liberating feeling. I can give you so much examples of things I did the last two years what wouldn’t be possible without BH.

So yeah, stick with it and I’m sure your life will change soon. I’m rooting for you.

Here’s a man in Belgium who is 99% cured now for 2 years, reaching out and still helping others with absolutely no agenda whatsoever. It really is amazing that people can be so nice.

And sure enough, later on that day, a new video appeared in their YouTube Channel. #14 titled Shy Bladder – Breath Hold in Action. 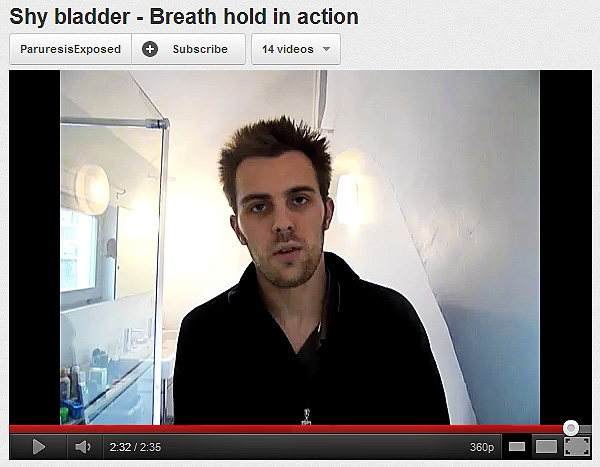 He mentions that I requested the video (somebody) and he does his best to add anxiety by taking down the bathroom curtains so people could see in… this would make any Paruretic anxious!


He holds his breath and within 30 seconds he’s Peeing.

Granted it’s not really a fair test, there are no people present, and not really a fear of being seen or heard (at home by himself), but the most important aspect is seeing the breath-hold in action.

He holds his breath so calmly that you can’t even tell he’s holding his breath. As he begins to pee he states “So like you see, it works… and I’m not even out of breath“.

This is true! I’d be gasping like crazy, but it’s no big deal for him. He’s not out of breath in the least. You can’t even tell from his voice when he begins to speak.

I’m happy he did this new video on Paruresis. It really does show me how effortlessly it can be done.

No one would ever know, even right next to him at a urinal. Not a clue!

This breath-hold really is the ticket to curing Paruresis.

Now if Dominic really wanted to show us how it works, he’d do a video in a more difficult setting. Like invite his friends over to stand behind him as he went. That would up the ante. It would be a tough test for anyone. Add some real pressure.

But then again, I don’t think that would phase him much. Like his comment above about peeing in the bushes on New Years Eve… Paruresis is behind him now. Peeing in front of thousands, now that would have made a great video!


The proof is in the pudding as they say.

The only thing that I would have changed about this particular video he made is this: Keep your chin up! He looks down as he breath-holds and it’s hard to see what his face is doing. Granted, he did it pretty effortlessly, but he is doing it without any real pressures. That could change the scenario in a heart beat.

It hasn’t made me start peeing yet, but it does make me want to more. Usually as I’m gasping in air I’ll start to pee… so I’m close!


A little delayed, but close.

Thanks again Dominic. You can Guest Post here any day. I’m sure the world would love to hear your success stories! :)