The House of Horrors

Public Bathrooms are not the only nightmare places.

Sometimes the bathrooms of your friends and family can be just as scary for a Paruretic.

My Mom and Stepdad lived in this little one room cottage on the lake. The bathroom was a small separate room off the side, but there was no door to the bathroom… Just a flimsy Brown Curtain! 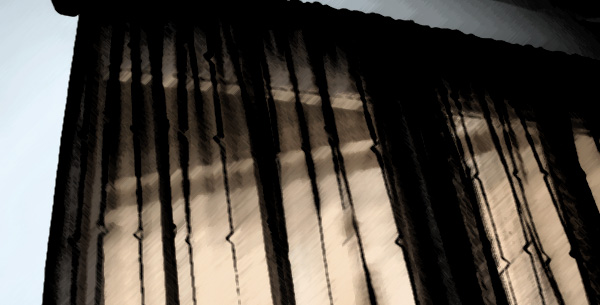 I Hated that Bathroom!

I could never use it during the day when everyone was awake and in the next room. I could never let anyone hear me go. I would actually wait until like 2 in the morning when everyone else was fast asleep, before I could finally relieve myself (still as silent as a mouse).

Until I flushed the toilet that is. The toilet flush was so loud in that little cottage. I gritted my teeth and closed my eyes. It was sure to wake everyone up… They know I just went!

That stupid brown curtain would also blow in the wind. The doors to the cottage were always open on either side of the house and a gentle breeze was always circulating, blowing and exposing the bathroom behind…

In fact, the couch that you would sit on to watch TV was literally just 5 feet away from the bathroom curtain. I can’t tell you how many times I had to sit and listen to my Mom going… Sometimes rather loudly!

It was a nightmare to behold!

I went over her house to fix her computer (I’m a geek), and after a couple of hours, I had to use the bathroom. She ushers me to the john, which is right off the kitchen where she’s cooking supper and her teenagers are seated at the table talking…

1) The Bathroom is the size of a broom closet (with the toilet right next to the door).

2) The Bathroom has NO door! Just one of those plastic accordion screens that didn’t latch well (magnetic). It left large gaps between the wall and between the floor where you could see my feet!

I must have stood there for 6 minutes trying to go while listening to her kids chat and laugh just inches away… I think I got a few tinkles out and finally gave up and came out (all eyes on me). Mortified, I went back to the computer and wasn’t able to get home and pee for another hour and a half!

I will never forget that bathroom (and I would never again use it).


Last year, I experienced an even worse bathroom…

I get invited over a friends house for supper. Chris and Kay were having Pork Chops. Sweet! I love a home cooked meal.

Before the meal is served, I decide to empty my screaming bladder. Chris shows me to the john and I thank him. He turns to leave, I shut the door, and fuck it, the door won’t shut.

“It doesn’t shut all the way” he says.

The door is broken, won’t latch, it even swings open a foot or two for all to see. I wanted to scream “Are you kidding me?“

The problem was, the toilet was at the end of the long narrow bathroom (I couldn’t hold the door closed with my hand or foot). It was easily seen by anyone walking down the hall.


I wanted to die!

I stood at the side of the toilet so my back was towards the door and tried my best.

I couldn’t go in the least.

I could hear footsteps on the wooden floors; somebody walked by. I could hear their dog playing with a squeaky toy nearby. I could hear laughing and chatter from the kitchen. Tenants upstairs were moving around. The furnace was making crazy noises… The faucet was dripping…

I gave up! I spent the rest of the evening in agony. All I wanted to do was pee. I don’t even remember eating the Pork Chops! Fuck!


I really Hate Myself!

Why can’t I be normal?

Why can’t I just Pee like every other Man?

Why do I have this stupid Phobia?

People that don’t have this problem, never have a problem with bathrooms. It’s no big deal to them. They just whip it out and go. Lucky bastards!

But to me, it’s sheer terror! Panic!

It’s just a silly bathroom and a silly toilet… Who would have thought it could turn into such a house of horrors?

It’s a nightmare I may never wake up from.