I Am Not Alone

My first step to finding a cure for Paruresis came with me doing a search on Amazon and purchasing a book called “Shy Bladder Syndrome“.

Up until then, I pretty much suffered on my own and felt like I was weird, alone and a freak!


Not Peeing is NOT Normal!

Once I got the book and started reading about Pee Shyness for the first time, it really opened my eyes.

Who would have known that 7% of the population has some form of bladder shyness?

I find this amazing especially since I’m 45 and have never run into another person who has this social phobia.


I really did think I was Alone!

I also learned that hiding this fear is damaging and accepting it and getting it out there is half the battle.

That’s when I made up my mind to create this website (www.ShyBladderHQ.com) and start my own blog about my shy bladder problem. No better way to cure myself, then to be totally honest about my condition, my past, my experiences, and my journey to find a cure.

I took the first steps writing about my childhood, my hostile parents, and my humiliation.

That wasn’t easy to do. I found myself in tears just opening up and putting it down on paper.

I’m very happy I did so. I’m happy because I’ve kept this secret bottled up in me for years and just getting it to the web, where millions of people can read it, is a tremendous feat.

I read stories in the Shy Bladder Syndrome book of other Paruretics (I didn’t even know we had a name), and I really felt a strong connection with them. There are tons more like me who suffer the same way I do. It was almost a relief.

I did a Google Search and was looking at the results to see if others had personal blogs on the subject, when I came across something that was like a revelation to me. I saw sandwiched in between the links Videos about Paruresis.


My Curiosity was Peaked

I clicked a link and up came a YouTube Channel called “Paruresis Exposed“. 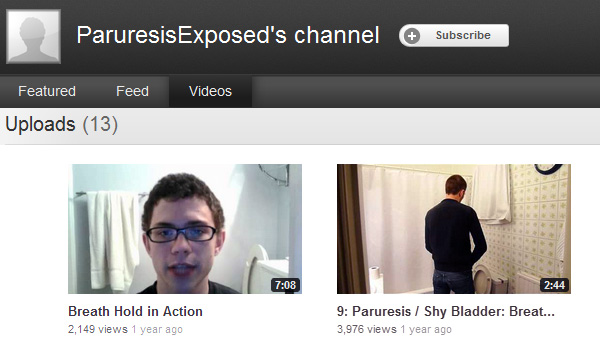 It was videos of Max talking about his condition. I was amazed that such a young kid could open up so freely on YouTube and share his embarrassing shyness. That takes a lot of guts!

I watched as Max demonstrated the Breath-Hold Technique (video named “Breath Hold in Action“). I had never heard of this method before (it wasn’t discussed in the book). So I watched in awe. Not only did Max talk about the technique, but he demonstrated how it works. He actually left the camera rolling in the bathroom as he went to the toiled and pissed.

Of course he didn’t show anything graphic, but just being in the same bathroom with him as he did his thing was both exhilarating and embarrassing at the same time.


I could Hear him Pissing!

Hi invited us into his personal space and could actually pee in front of millions watching. That takes courage!

There are 13 videos in the channel. Some with Max, and some with Dominic M. who shares the page.

Dominic M. actually had a pee-buddy (I hate that name) film him as he did the breath-hold. I can’t imagine doing that with someone in the same room (not yet at least). He demonstrated the breath-hold technique by holding his breath and going to the bathroom to pee.

Just the sound of him peeing loudly raised my anxiety level. It’s like you were next to him at a urinal and it’s the exact thing that I usually avoid. I pee on the side of the toilet bowl so it’s quiet…

He was so open, so free, so honest, so loud…

He showed me there is a cure in the breath-hold. An easy one if you can actually master it (from the forums, it doesn’t sound like everyone can).

Holding your breath is all it takes?

I vowed from that moment on I would start applying this technique to all my bathroom visits. I will work on it until perfection. :)

If this will cure me from my fears then it’s worth every frustrating moment to get there.

Max also talked a lot about the forums and the stories and how they can really help you (www.paruresis.org).

I went there and signed up (I suggest you do the same). What did I have to lose? My fears?

My name on the forums is “PeeShyRichard“. Look me up. Chat with me. Maybe we can help each other overcome Paruresis.

I even left a reply to a post already. Not that I could be much help, but united we stand… right?


I will concur this thing!

Upon searching the forums I did find Paruretic Max and Dominic M on there as well. I added them as friends.

I also found the blog that Max started last year (Aug. 2011) entitled “ZEN AND THE ART OF REALITY“. I read every post he wrote and left a few comments. He replied back pretty quickly which is awesome. Thanks Max! I really do appreciate it!

I’m not keeping this bladder shyness a secret anymore.

I am going to beat this monster and get my life back.

One other person I found from YouTube was DaveA. you’ll know him because he wears a t-shirt that says:


Shy Bladder
So What?

Dave is very open about being Pee Shy. He even wears his t-shirt out in public (like a busy shopping mall). I give him tons of credit for that. I would die!

I couldn’t imagine being so out there and free… I love the fact that he’s educating people that having pee shyness is no big deal. It’s not something to be ashamed of.

That was scary and made me squint. I don’t think I would ever want to do that. I don’t want to stick anything up my penis…

For now, I believe I’ll concentrate on the Breath-Hold technique and see if that will do the trick.

I’ve been unsuccessful so far (4 days). I’ve been relaxed enough (doing it at home). I’ve waited to go and got to the point where I’m gasping for air and still held my breath beyond that (they say about 10 seconds). I got nothing!

No Stream! Not even a Drop… YET!

I’m not going to give up. I’m going to continue to try until I master this technique (or drop to the floor and pass out). :)

I believe I will do it.

But then again, Paruresis is a mind thing as well…


I refuse to let this Shyness win!