I’m fearful of bathrooms and I’m scared of what other guys will think of me.

I need to keep saying to myself “What’s the worst possible thing that could happen?” Really! What’s the WORST case scenario? 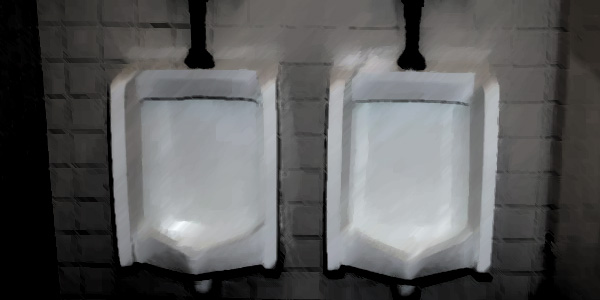 One guy comes in and takes the only other available urinal, which of course, is right next to yours. Great, you’re shoulder to shoulder with shame.

You are locked up and can’t pee. The other guy steps up, unzips, and within a couple of seconds he’s peeing. You’re just standing there, silent, focused straight ahead, trying not to listen to the sound of his urine.

He pees for 20 seconds, shakes, zips, and is now washing his hands.


Does he say a word to you?

Does he turn and glance at you?

Does he even realize that you’re not peeing?

Some people DO pee quietly. You can’t tell!

Some people can pee for minutes as well. He has no idea if you’re peeing, if you’ve peed, what you pee like, and he doesn’t care either.

It’s your bladder. Your pee. Have at it!

He’s out the door and you are the furthest thing from his mind (unless your pants are down around your ankles, then he may still be laughing about it).

But seriously, you may as well be invisible to him because he paid you no attention. He didn’t see that you were shy, nor that you were even in there a while.

What do you think he’s going to do? Scold you for not being able to pee? Point fingers? Laugh?

“Ha ha ha, I can’t believe you’re such a wuss that you can’t pee at a urinal like a real man! ha ha ha!“

Do you think he’s going to shove you? Push you? Punch you? “Get LOST! You can’t PEE!“

This is NOT going to happen! NEVER!

Let’s say you walk into a bathroom and are standing at one of the two urinals (no dividers, side by side)…

Another guy enters right behind you. He goes instantly to the second urinal. You close your eyes for a second and curse your phobia.

He’s making all kinds of noise, grunting, unfastening his jeans, he needs to go really badly!

Suddenly, someone else walks in and sees that the only two urinals are full. You feel the room close in… Does he wait? NO! He goes to the one stall in the bathroom to pee (and doesn’t even bother closing the stall door).

Now the bathroom is full and the guy next to you is pissing like a racehorse.

You, on the other hand, are trying to get a stream going. Even a dribble. Anything. You have no luck.

That’s about the time that another guy enters the john. Oh NO! Your heart races out of control. He sees that the bathroom is entirely full. Now he has to wait. You can feel his eyes on the back of your head.

He’s impatient and making loud sighing noises. The guy in the stall is taking his time. It seems like the world is standing still…

You are frozen in fear and are just standing there not peeing a drop.

The guy behind you notices this and mumbles “Come ON!“

You feel your anxiety heighten even more. You brain is screaming to retreat, retreat! Get out fast!


You make him wait!

The guy next to you is still peeing, although more slowly now. You think he’s setting a world’s record for longest urination.

The guy behind you starts sighing again and tapping his feet. You can tell (and so can everyone else) that he is uncomfortable and needs to void.

You exhale and try to focus.

Your face feels red. Your heart is thumping loudly in your chest. Your leg begins to shake slightly.

The guy in the stall flushes. He’s now goofing with his clothes, tucking his shirt in. His elbow is bumping the door which is banging against the partition.

The guy behind you grunts again and let’s out a heavy exhale. He’s dying to go! You feel bad for making him wait.

The guy next to you finally finishes. He does his little dance so the last few drops don’t go in his pants, and he’s tucking in and moving out…

2 seconds later, the desperate guy runs up to the free urinal and gives you an evil eye as he unzips his pants.

You can tell he’s mad and upset, and I’m sure a few choice words are going through his mind, but he doesn’t say a word…

You can feel heat generating from his body. His elbow is touching your elbow. It’s intense!

You keep staring forward not moving an inch.

The guy in the stall washes up and leaves.

The first guy finishes drying his hands and he leaves as well.

The guy beside you sighs relief and finishes too. Thank God!

All the time you just stood there and didn’t urinate in the least.

The last guy leaves without washing his hands (figures). He also gives one last exasperated grunt, but he doesn’t say anything. It’s done. It’s over. No one got hurt!

And as he leaves, the door bangs quietly shut.

Remember, I said this was the WORST Case Scenario! Most Paruretics would have probably zipped up and went to the sink to allow the impatient pee’er the urinal. That’s the nice and proper thing to do (maybe even telling him “Go ahead, I’m locked up“). That is, unless you’re right on the verge of peeing. Then I would continue to try. But I wanted you to see that even going to extremes and hanging onto the urinal doesn’t matter much in the long run. It all works out in the end.

Everyone got to pee eventually, including you as you are now alone in the bathroom.

It takes you minutes to calm down enough to get the stream going, but your anxiety dissipates enough to let the bladder release. Relief at last!

Peeing feels so good. It’s great that you didn’t back down, you rode your Paruresis through. This would have been a hair-raising situation for just about anyone. And yet, still nothing happened!

No name calling. No laughing. No pushing. No shoving. Nothing!


Just you and your fears!

You finish peeing. You wash up and leave. No one is waiting outside the door. You don’t see people looking at you. The guy who had to wait is no where in sight (I’m sure he’s had to wait longer before). You realize that no one knows what was going on. No one cares.

And here’s the funny part… It’s only been 5 minutes!

Your friends didn’t even realize you were gone. So really, what’s the worst thing that could happen? Have you ever heard someone getting taunted in the bathroom?

NO! (Not since Grade School)

Have you ever seen a fight in the bathroom because someone couldn’t pee?

Will any harm come to you for hogging up a urinal?

The worst thing that could possibly happen is the fact that you may have to be uncomfortable (even more so) for minutes on end… as long as it takes.

If you take 10 minutes then maybe your friends will notice you’re gone and send out a search posse (but I doubt it).

Taking a bit in the loo is normal and happens to everyone. Get over it! Some people have to go #2 and spend 1/2 hour in there. So what?

No one really cares. In fact, they don’t want to know! ha!

The really important thing about this is that you did pee!

And that’s the BEST thing that could have ever happened.