If there’s one thing that scares the crap out of me, it’s prison.

Or, should I say, it’s using the bathroom in prison.

I could never do it.

I don’t see how anyone uses them, let alone people with shy bladder.

The toilet is basically just an open seat in the room. No partitions. No walls. No privacy in the least. Just an open toilet on the cold cement floor. That’s a nightmare! 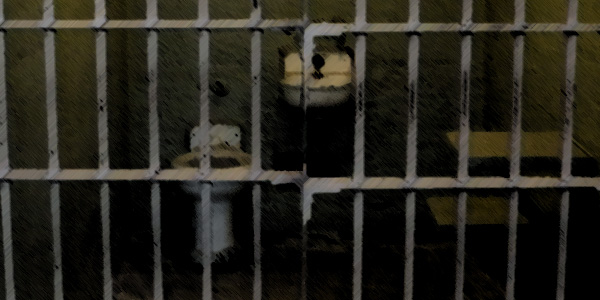 You have to use it where anyone walking by could see you, hear you, taunt you.

People across the hall could watch you. Your bunkmate could be 2 feet away when you feel like exploding… They would hear your breathing, grunts, farts…

You don’t even have a second to yourself.

I’m sure there are tons of guys in prison who are pee shy. How vulnerable they must feel.

I often think of how I’d deal with my condition if I were to ever get locked up (even for just a night).

I’d probably die! I don’t think I’d ever have enough balls or courage to go in front of complete strangers (let alone violent ones) who are looking at you, listening, talking, staring, judging…

It blows my mind to even think about.

I seriously would love to know how one survives this ordeal.

What about the guys who get locked up for a weekend drunken bar fight?

There’s got to be a shy bladder somewhere.

Do they wait until their mate leaves for lunch? The phone?

Do they hold it until the middle of the night and hope they don’t wake anyone?

Do they cover themselves with a blanket so they aren’t so exposed?

How do they react when their cellmate uses the toilet? It’s got to be horrifying!

Do they end up getting cured just because they’re forced to? Especially those in for life… Or does it just kill them? (Which ever comes first?)

If you have no choice but to go, will the bladder finally go?

Could something like this cause years of anxiety to slip away, or does it just make it worse?

Do people with shy bladder get special treatment in there?

I’ve never been to jail or prison, and I’d like to think that I would never be either.

Because it’s not the prison, nor the criminals, not the feeling of despair, loneliness or helplessness that frightens me. It’s the toilets!

My Paruresis already makes me feel like a prisoner. Shackled and locked up. Doing time with my greatest fears.

To be under more pressure, more scrutiny, and less privacy would just send me over the top.

A place worse than any jail cell.

So here’s hoping that I stay as far away from the courts as possible. But I know with some people, that just didn’t happen.

For whatever reason may be, some Pee Shy Guys (and Gals) are, or have been, locked up and know what I’m talking about.

Speak up in the comments below. Tell your story.

Talk about Paruresis in Prison!

Or did it lock you up even more?

I’d love to hear from you.

10 Responses to Prison and Paruresis